Starboard Cannons - Down Below 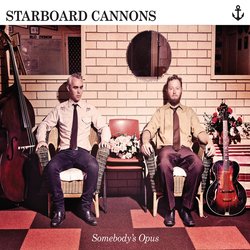 Based in Byron Bay’s forested hinterland, Starboard Cannons is the creation of Ash Bell and Matt Bone. Fundamentally an acoustic duo, Ash and Matt have been writing and performing together since 2009. Over the last decade, Ash has established himself as a unique and hard-working singer/songwriter, performing both as a solo artist and with several bands throughout Australia. Matt has been part of the Australian alt-country scene for many years, playing many shows and festivals Australia-wide.

Many attempts have been made to describe Starboard Cannons‘ style of music; ‘Alt. Folk’, ‘Australiana Roots’, ‘Celtic Colonial’ are just a few. The sound is distinctively Australian, laced with the classically evergreen overtones of traditional Gaelic music. Ash’s lyrics tell the stories of ordinary people, small towns, far away countries and glancing thoughts. His Oz-inflected, natural delivery and the honesty of his words puts a human element and shines an introspective light into every song.


A classically Australian shanty-style folk song, telling from the perspective of convicts aboard the First Fleet. Punctuated with tastefully intricate mandolin work, 'Down Below' takes a dynamic journey through sparse, intimate soulfulness into straight-up, raucous, ale-house singalong territory.


Other tracks by Starboard Cannons: Mists Of Culloden  -  When This Water