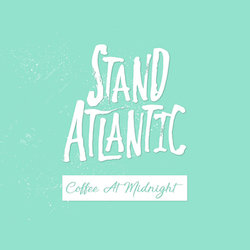 Australia’s exciting newcomers to the music scene are alternative pop/rock trio, Stand Atlantic who formed in 2015. High-school friends Bonnie Fraser (vocalist), Jonno Panichi (drummer) and David Potter (bassist have gone from strength-to-strength since releasing their demo EP. They have since supported local and international bands including As It Is, With Confidence and This Wild Life and signed with international label, Rude Records.

Enlisting the help of producer Stevie Knight (With Confidence) mixing engineer James Wisner (As It Is) and mastering engineer Grant Berry (BUSTED, Me VS Hero, Milestones), the band crafted ‘Sidewinder’. The EP offers a fresh blend of melodic hooks and power-driven instrumentals that allows them to shine amongst the saturated music scene. With an honest lyrical nature at the core of the band’s foundations, Sidewinder will undoubtedly launch the band towards great things.

Stand Atlantic will release their debut single, 'Coffee at Midnight' and accompanying music video on Monday 26 June 2017. Their anticipated Sidewinder EP will be released on September 15, 2017 via Rude Records. The band will be supporting the release with plans to tour locally and internationally – stay tuned for more news still to come.


With their debut single ‘Coffee at Midnight’ released on June 26th, Bonnie says, “the song is about that feeling of desperately trying to cling onto something or someone vs. finally letting go and realising that maybe it just wasn't that great in the first place.”