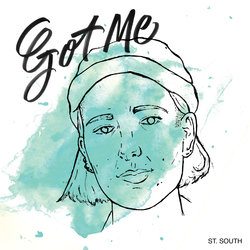 St. South has already had millions of plays on her independently released singles Cadence and Slacks (the latter was also featured in everyone's fave teen blood sucking drama The Vampire Diaries!), and has a devoted fan base thanks to her beautiful covers (her Drake re-work is all time!) and intimate studio videos that she's long been sharing with fans on her platforms. Olivia's also got a serious accolade under her belt - back in 2012 she won the Bon Iver Stems Project with her track 'We Washed Texas', a re-mixed combination of three Bon Iver songs - the remix was officially released on Bon Iver's exclusive Stems Project album.

As well as Bon Iver, a big inspiration for St.South's style has been Chet Faker’s seminal album ‘Thinking in Textures’ - it served as the artists' introduction to electronic soul. Other artists that inspire St. South's music-making include St. Vincent, Courtney Barnett and Sharon Van Etten.


“Music to cry to” St. South makes beautifully layered productions and teams them with her stirring, warm soulful voice to create intimate, honest songs that will appeal to fans of artists such as Shura, Tei Shi, and Vera Blue, and this is every bit evident on 'Got Me'.