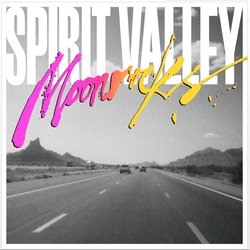 Amongst the constant writing, rehearsing and playing in 2014, Spirit Valley’s Dave Tomlinson and Chris Stabback gave birth to the dark ‘n’ dancy genre of “Doomshine Boogie”.

Drawing influence from their own early experiences in rave culture, a love for chanting, sidechained bass lines and a thirst for playing to a sweaty dancefloor, the band headed in to Linear Studios with Wade Keighran (The Scare, Wolf & Cub) for 4 days. Out Feb 27, Give Trance a Chance is Spirit Valley's debut full length album; a casual 9 rowdy dance floor shanties sitting on the worlds first 49 minutes of Doomshine Boogie.

2013 the band flew to Los Angeles, bought a Chevy Gladiator and tore across the Southern American deserts to Austin, Texas for 3 months. With nothing booked beforehand and a whole load of good old fashioned hustling they pulled off 26 shows across Louisiana, Texas, Arizona and California including a 2 month residency at Austins prolific Hole In The Wall.

The band have toured up and down the east coast including a national support with Canadian dance rockers Metric, spots at Sydney and Brisbane PsychFest, and Chopped in Victoria.

Give Trance A Chance is out digitally Feb 27


A hazy blend of fuzz heavy guitar and tribal dance-floor drums, ‘Moonrocks’ is a trippy walk across modern psychedelia and the first taste from the debut album. To celebrate, the guys will head out for an East Coast Tour through March before relocating to Europe.