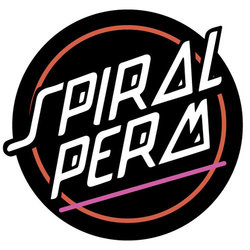 Spiral Perm is a garage-psych-pop three piece. Kate (Bunny Munroe, Deep Scene), Rita and Ali join forces by creating bold, sparkly guitar riffs with punchy and hypnotic drum beats. Their sound is reminiscent of The Black Keys, Yeah Yeah Yeahs and Ty Segall, while everything is topped off with Ali’s vocals and lyrics, in which she reflects on politics, science and relationships, honed through an epic career in her solo outfit Ali E and other acts Little Athletics, Heavy Beach, Damn Terran and Mod Vigil.

Starting in 2017 Spiral Perm’s DIY attitude has helped them to release both a video clip and three EPs with launches where they packed out legendary Melbourne venues The Tramway Hotel and Polyester Records, respectively. With a salmon-coloured Toyota Starlet packed to the brim full of music gear, booze and snacks, the EPs were recorded over one weekend down in Phillip Island at Kate's family beach house.

Spiral Perm has played many shows including a summer residency at The Tote, and has been fortunate to support The Peep Tempel, Rolling Blackouts Coastal Fever, Cash Savage and the Last Drinks, and also garnered a slot on the debut ‘Bush’ festival, alongside Lazertits and The Pink Tiles.


A Santa at NASA is a palindrome. It's the song you listen to when you want to escape, with your best friends, from the drudgery of modern society.