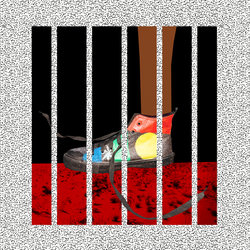 Spinifex Gum is a powerful and sonically innovative project that entwines creative voices from the length, breadth and depth of Australia to mine the heart of its land, its people, its history and inevitably its politics.

Created by the Cat Empire's Felix Riebl and Ollie McGill for Marliya, of Gondwana Choirs, the album features guest vocalists in a song cycle reflecting the dramatic contrasts of the Pilbara region of northern WA.

The single Locked Up' was co written by Briggs and Felix Riebl and Ollie McGill (The Cat Empire).

The single takes aim at the disproportionate rate and sickening treatment of Indigenous Youths in juvenile detention.

Briggs’ rap highlights the economic, social and political injustices suffered by local communities in the far north of Australia. “Maximum punishment, rehab is minimal, treat them like that you just make them better criminals … Why’re the kids locked up? Take this silence and blow it up”.

Briggs say today “I got involved with the song 'Locked Up' because artistically; it sounded phenomenal. The youth justice is something I'm passionate about and the girls voices have brought light to such an intense subject matter. The choirs have brought such an original, honest, powerful and moving presence to the Spinifex Gum project and it was a pleasure to be part of.


‘Locked Up’ is the new single from BRIGGS (A.B Original) and Spinifex Gum, a collective made up Felix Riebl and Ollie McGill (The Cat Empire), Marliya (of Gondwana Choirs), an all-female choir of teenage Indigenous singers hailing from Cairns.