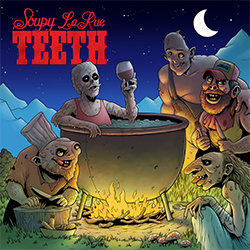 The Brisbane punktry 5-piece are inspired by tales of their namesake, Soupy LaRue – an entity thousands of years old. He lives outside of time and wanders the Earth and other vaguely entertaining planets. After several strange, paranormal encounters they began sharing his stories through their music.

Their music goes against the grain, taking elements from different genres and blending them into a ‘Soupy’ mixture of messy fun.

Soupy LaRue have been playing gigs around Brisbane since 2013, including shows at The New Globe Theatre, The Underdog, The Waiting Room, The Hideaway, Coniston Lane, The Milk Factory and Rics Bar, with other performances at events such as Eat Street Markets, Fete De La Musique and Lost Movements Festival.

Having released their debut single ‘Next Door Stranger’ in February, Soupy LaRue are due to release their second single ‘Teeth’ in August, with more tales of Soupy LaRue’s adventures to come in the lead up to the band’s debut EP due for release later this year.


Mixing husky vocals, ska-like, upbeat feels and wild-western guitar riffs ‘Teeth’ was inspired by the tale of when Soupy LaRue stumbled across a tribe of cannibals in South America, prompting the band to write about the ritualistic aspect of the consumption of human flesh.