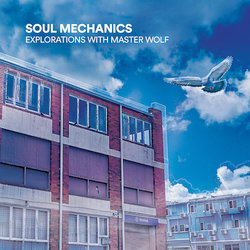 Originally a three-piece house band laying down sweet and sour improvised grooves for dinner guests at various Fortitude Valley establishments, a chance encounter with a live-to-air freestyle rap session on 4ZZZ introduced the band to the lyrical wizardry of Master Wolf. The EP’s opening track 'How We Jam' recounts the genesis of this collaboration.

"I first heard Master Wolf freestyling on a radio program late one night and was blown away by his skill. I thought that what he was doing would really compliment what we were doing. I literally tracked down his number the next day and called him to see if he wanted to collaborate with us." reflects Brian L'Huillier (bass).

To try and capture the essence of the live experience, the band shacked up for a weekend in Dave Kemp's (drums) studio and, true to their ethos, the musical skeletons were jammed on, fleshed out and the results recorded and presented in this EP.


This is the genesis story of Soul Mechanics' collaboration with Master Wolf. Underpinned by break beats and down-home hooks that are all played live - 'That’s How We Jam' tips it’s hat to the hip hop of old that heavily relies on jazz and funk to tell its story...