Sons Of The East - Into The Sun 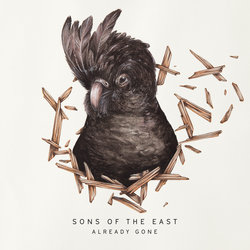 Sons of the East is an indie-folk band from Sydney, consisting of Jack Rollins, who once tamed an emu; Nic Johnston, the guy who is without a doubt the best at finding short cuts; and Dan Wallage, whose hair was once described by David Attenborough as ‘the single greatest organism to ever grace the earth’.

Their sound is a saucy, heterogeneous melting pot of diverse indie sounds and sundry folk melodies; a multifarious and motley mix of banjo, organ, piano, guitar, stirring harmonies and the occasional didgeridoo. The result is a modern, alternative folk sound that draws on truly eclectic influences from far and wide, but somehow winds up feeling like home. In other words... It's good.

Sons of the East pride themselves on their rowdy and rambunctious live shows, working off what they call the ‘tear-jerkers’ and the ‘boot-stompers’. This has gathered them attention from radio stations, websites and blogs, a couple of old ladies in Yass, and plenty of venues and festivals across Australia. Sons of the East have graced the stage with many big name acts.

Catch them at a live show where they’ll have you dancing like a tourist running along the hot sand in summer.


Into The Sun is the first single from Already Gone EP. Self-produced in a Sydney living room, the single is an epic and intensely intimate portrayal of a frayed relationship.

Other tracks by Sons Of The East: Fast And Slow  -  Already Gone