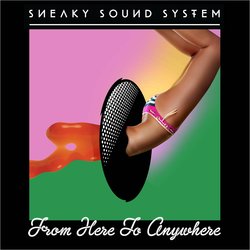 Powerhouse singer Miss Connie Mitchell and producer extraordinaire Black Angus McDonald have been working on their imminent third collection, From Here To Anywhere, since 2009. The pair wrote all of it themselves, between tour dates, in hotel rooms and studios from here (Sydney) to just about everywhere (London, Paris, Ibiza, Moscow).
Connie and Angus started making beautiful music together in 2004. As their reputation grew, thanks to the still-weekly Sneaky Sundays club night in Sydney, Sneaky Sound System started releasing singles (including Hip Hip Hooray and Tease Me) and eventually, in 2006, a self-titled debut album. Spearheaded by a spectacular salvo of hits – think UFO, Pictures and I Love It – Sneaky Sound System won ARIA awards for best dance release and best breakthrough artist in 2007.
Striking while the iron was all but on fire, second longplayer '2' arrived in 2008 with dancefloor slayers in the form of Kansas City, When We Were Young and the #1 UK club smash It’s Not My Problem. In 2009 I Will Be Here, a collaboration with Dutch superstar DJ Tiesto, took Sneaky Sound System to the top of the US dance airplay charts.


Back with a thoroughly reinvigorated sound, Sneaky Sound System deliver a sleek track. Under the watchful eye
of Serban Ghenea, studio guru of No Diggity fame and go-to-guy for Jay Z, the single sends Sneaky Sound System’s trademark future pop to a nouveau dancefloor in a galaxy far, far away.