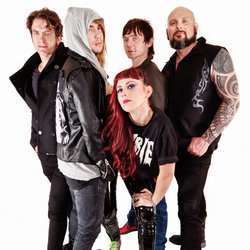 Aptly named, the only word to describe this group is smokin’. Like the smouldering heat from a well-tended fire, the eclectic rock punk outfit known as Smoking Martha has the intensity to scorch your best shirt but the discretion to spare your eyebrows.

The band is preparing to release their debut EP, recorded at Airlock Studios with Ian Haug (Powderfinger) at the helm.

"Their vintage-tinged rock’n'soul performance is a fire that smoulders, warping your senses with waves of heat…sparking, hissing, teasing, and occasionally igniting into a full-blown blaze."
- HEAVY & WEIRD MUSIC BLOG


Sweet As Honey is a sexy bass driven rock song with raw bluesy female vocals soaring over the top. It is the song you listen to when you get ready for a night out or when you're screaming down the highway doing 120kmh!