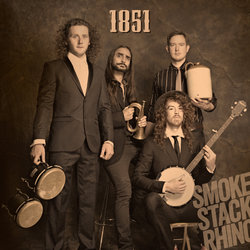 After the departure of vocalist Ben Lawoko-Leaney in late 2014, the group looked to the example set by Deep Purple and AC/DC, and set out to find another singer.

In March 2015, Dave Sirianni joined the band and the four-piece resumed live performances, headlining the Arockalypse Music Festival alongside HARTS. In September, the group started recording their debut album.

Accompanied by a music video and an East Coast tour of Australia, the Stevie Ray Vaughan-meets-Soundgarden jam “Screwdriver Girls” was released in April 2016. The second single, “1851” was the follow up and pays tribute to boogie-blues artists including John Lee Hooker and ZZ Top.

Produced by Beau McKee and Smoke Stack Rhino guitarist Ash King, the debut album will be released on October 21st, 2016.


Other tracks by Smoke Stack Rhino: Rumblefish (Part One)  -  Party People Of The Cherry Bar