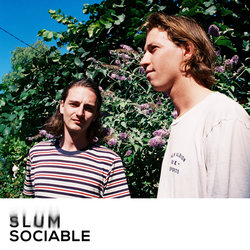 A Melbourne duo steeped in groove, their music a firm hold on the hips guiding them left to right to left in hypnotic sway through the intersection of jazz, electronica and soul. Their repertoire boasts an EP, TQ and a slew of singles including ‘Anyway’ and ‘Name Call’.

Released late in 2015, TQ’s luxurious charm saw the duo cut through internationally. Tracks like ‘All Night’ and ‘Apartment’ received love from noted radio stations including Beats 1, BBC Radio 1 and KCRW, also popping up on a throng of Spotify and Apple Music Playlist’s. It also saw them release a single via tastemaker label Kitsune and tour globally, with performances throughout the UK and US, and slots back home at St Jerome’s Laneway Festival and Splendour in the Grass.


Other tracks by Slum Sociable: Castle
%