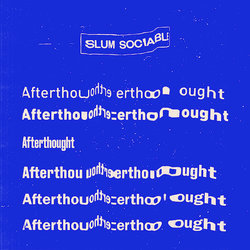 Slum Sociable are proud to reveal a striking new single ‘Afterthought’ - out today through Liberation Records. It’s the third track to surface from the subversive Melbourne duo this year and falls just four weeks away from their headline show in Melbourne, dubbed The First Annual Slum Sociable Xmas Special, which is set to take place at the Corner Hotel on 13 December.

‘Afterthought’ follows on from previous singles ‘Do Something About It’ and ‘Can’t Figure It Out’, which have had a huge response from fans and featured in a deep bag of global playlists on Spotify and Apple Music, collecting close to 2.5 million streams. The band’s recent cover of Mark Ronson’s ‘Somebody To Love Me’ is featured on triple j’s celebrated Like a Version Vol. 14 and has now received over 100K views.


‘Afterthought’ is an up-tempo summer heater and the duos most dance-ready tune to date.

Slum Sociable teamed up with Kim Moyes of The Presets, to bring the idea to life. They also shared production duties with Konstantin Kersting (Mallrat, The Jungle Giants).