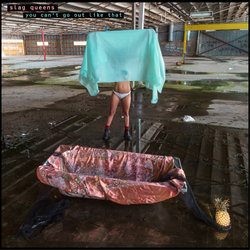 Songs about life in Tasmania, conflict and survival under late capitalism, and slagging off your boyfriends, girlfriends and queer pals. It’s a document of the band’s unique and considerably diverse sound as it’s developed over the last two years;
Slag Queens was formed in 2015 by vocalist/bassist Lucinda Shannon and drummer Claire Johnston. For this album they were joined by guitarist Tamara Kempton and Dan Kolencik on synths, who both moved on to other projects in late 2018. Slag Queens have since gained Amber Perez (The Foxy Morons/Dolphin/Slumber) on guitar/bass and Wesley Miles on synths.
Following the success of their single ‘Waterfall’, Tasmanian post-punk group Slag Queens are set to release their debut full-length album ‘You Can’t Go Out Like That’ on February 4th via Hobart’s Rough Skies Records.