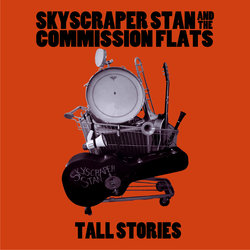 Skyscraper Stan and Oskar Herbig are cousins who grew up as brothers. Together they discovered the guitar and the indescribable thrill that comes from creating music. When unforseen events separated them in their formative years the two continued singing and playing on different ends of New Zealand’s North Island, swapping musical musings over the phone and at sporadic reunions. In the other's absence, each of the lads found their own path into the world of musicianship.

Stan found song writing. He's a storyteller who spends his days putting the world around him to music. Oskar threw himself at the guitar birthing an audacious style somewhere between Marc Ribot, Robbie Robertson and a hand grenade.

Stan moved from New Zealand to Melbourne, then from Melbourne to the USA. Then when immigration eventually sent him back to Australia he called Oskar who arrived in Melbourne a few months later.

Stan's musical abilities end when the last lyric is written and the last chord strummed. Oskar runs the tune through his jet black Gretsch and the finished work is delivered to the band who, armed with bass, drums, horns and voices, complete the picture. They call it Troubadour Rock 'n' Roll.


An uptempo, layered tune about being in one place and wanting to be in another. Written when Stan was stuck in Canada trying to get back to New Orleans.

Other tracks by Skyscraper Stan and the Commission Flats: Moses  -  Fools and Handsome Men