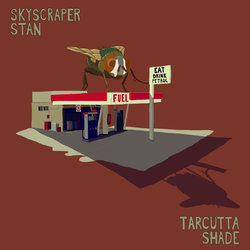 For years Skyscraper Stan has been a staple of the Australian Americana circuit, whether alone with an acoustic guitar or with his band - electrified. Originally classing himself as a country musician his earlier influences included pre-war blues, the Laurel Canyon songwriters, Nick Cave and Sam Cooke. Since arriving in Australia from New Zealand in 2009, The Drones, Peep Tempel and Paul Kelly among others have been added to the list. As a touring musician based out of Central Victoria, Stan spends upwards of half the year on the road. His regional tours have taken him to every state and territory in Australia, from Katherine to Hobart. Stan has played across New Zealand and Vietnam, released a live album and written a song for academy award long-listed documentary 25 April. He has shared bills with artists such as Marlon Williams, The Troggs, The Animals, The Church and C W Stoneking and has appeared at major festivals around Australia.


Tarcutta Shade' is the latest single from rock n' roll troubadour Skyscraper Stan and his band The Commission Flats. Recorded at Woodstock Studios in Balaclava by Richard Stolz (Husky, Paul Kelly, Joe Camilleri) 'Tarcutta Shade' is a sonic depiction of one long, hot and sweaty day at a Riverina truckstop - where it's "40 degrees in the Tarcutta shade".