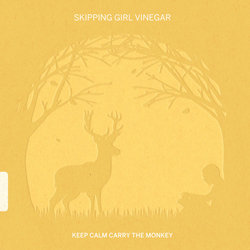 Melbournian five-piece Skipping Girl Vinegar is one of Australia’s most talked about up-and-coming bands. Established in 2006, the band comprises of brother/sister duo Mark and Sare Lang and their respective childhood friends Chris Helm, Amanthi Lynch & Kelly Lane. Their debut album launched in 2008 – “Sift the Noise” brought the band to the attention of the music industry and earned them critical acclaim from senior music writers across the nation.

Fast forward to 2011 and the band has proudly released their highly anticipated follow up album “Keep Calm, Carry The Monkey”.

Keep Calm, Carry The Monkey was written across two continents and recorded on the Victorian coast. Mixed in Nashville by legendary indie engineer Brad Jones and produced by Melbourne indie-wiz Nick Huggins [Kid Sam, Whitley], Caleb James [Yves Klein Blue], Greg Arnold [Stonefield] and SGV’s Mark Lang the album is rich with sonic landscapes, melodies and lyrical turns. Said by numerous reviewers to be a darker mood than their debut, the band has integrated more sonic texture and integrated the soundscape links to create a collective, overall thought to the album. 'Keep Calm, Carry The Monkey' closes with a hauntingly special guest performance from legendary singer/songwriter Ron Sexsmith.


'Chase the Sun' heralds the start of summer - it's about winding the windows low, cranking your favorite track and running as far and as fast as you can from the city's dust into the arms of your favorite coastal town.

Other tracks by Skipping Girl Vinegar: You Can  -  Chase the Sun
%