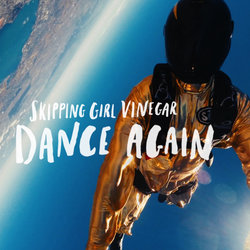 Indie force of nature Skipping Girl Vinegar have returned from the U.S. to officially launch their third album The Great Wave at Bluesfest this April. Celebrated songwriters, the band have released two critically acclaimed albums to date; Sift the Noise and 'Keep Calm, Carry the Monkey' that made many ‘Album of the Year’ lists, receiving extensive radio play on U.S. college radio, Triple J, ABC and community radio nationwide, as well as thrilling audiences at many of Australia’s premier festivals including Splendour In The Grass, Falls, Woodford, Bluesfest and more.

In 2014, Legendary U.S. producer Brad Jones (Josh Rouse, Missy Higgins) flew from Nashville to Australia specifically to work with SGV on their upcoming third full-length after hearing the album demos, with the band taking the world-class producer out of the big studio environment to record in tin sheds and abandoned halls along the very same Victorian coastline that so heavily influenced the writing of the album.

A testament to love, The Great Wave is a sonic explosion of colour, capturing the move away from city, the heart-break of a cancer diagnosis, the search for hope and light in the depths of critical life challenges and the journey into recovery.


Exploding with energy from the moment it starts, 'Dance Again', Skipping Girl Vinegar's first single The Great Wave will grab you by the balls and throw you feet first into a dance induced frenzy. The celebratory tone and lyrics are reflective of the euphoric feeling experienced after tough times.