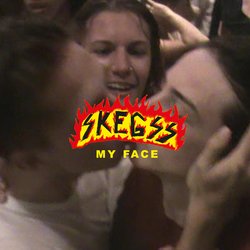 Skegss are three legends from Byron Bay, out for adventure and they have found it. Releasing their debut single “Fun” to high rotation on Australia’s largest youth radio broadcaster ‘Triple J’ in 2015 and signing to Dune Rats’ record label ‘Ratbag Records’, Skegss have proved to be one of Australia’s most unpredictable and exciting new bands.

Fast forward a few months to the release of their second single “Eat It” along with their debut EP ‘50 Pushups For A Dollar’ (recorded at the Converse Rubber Tracks Studio in New York) and the band have now racked up over 200 thousand views on Youtube, over 250 thousand plays on Spotify and over 10 thousand Instagram followers in just twelve short months.

Their success can also be seen on the live circuit as the band have gone from selling out home town shows to selling out most of the shows of their East-Coast EP tour of regional and capital cities and playing major festivals all over the country including Splendour In The Grass, Mountain Sounds Festival, Yours & Owls Festival, Festival Of The Sun, Sound Of The Suburbs, and BIGSOUND.


The first single My Face, Ben Bograil says “this song is about feeling good and feeling bad and if yesterday sucked make today not suck.”