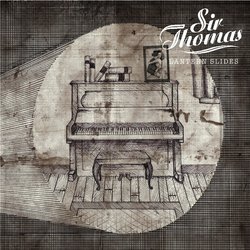 The making of ‘Lantern Slides’ was a five year journey for the four piece band, made possible through the financial support of their fans. The band funded the album using an inventive crowd-funding scheme based on the ‘100 True Fans’ concept. ‘100 True Fans’ donated $100 each to be involved in the creation of ‘Lantern Slides’. Sir Thomas then gave these fans the opportunity to choose the songs that the band recorded on the album. The fans have also had their name and photo included on the album artwork.

The band also received a grant through the Contemporary Music panel of the WA Department of Culture and the Arts. This gave them access to legendary producer Noah Shilkin, who recently returned to Australia after over 30 years in the music industry in North America. Sir Thomas spent two weeks at Shilkin’s residential studio in Margaret River working on the album.

Sir Thomas have a unique lineup of piano, keyboard, bass and drums (no guitars). Their influences are wide and varied including Radiohead, The Beatles, Neil Young, The Smiths, Sigur Ros, Arcade Fire, Pink Floyd, Nick Drake and Elbow.


Let's Start a Riot is the opening track to the album 'Lantern Slides.'

Other tracks by Sir Thomas: King Will Come  -  Don't Let Her Break Down
%