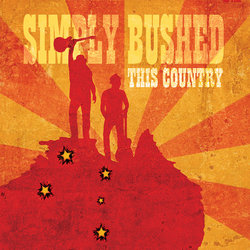 It’s not common for bands these days to boast of their purity in one particular genre. But Sydney-based group Simply Bushed, well they wouldn’t tell you they’re anything but through and through Australian!! “Colonial Rock”, Yes they’ve even invented their own genre to communicate just how proudly, unapologetically Australian their music is. Fans from urban Australia as well as those living and working in the bush are taking notice.

What started as an informal get together of musicians for one gig over 20 years ago has morphed into Simply Bushed. This five-man juggernaut, creatively led by Paul Grierson and Chris Rieger, is best known for their raucous yet polished live shows and the powerful wall of male harmonies. The music invokes a wide range of emotions as the listener is drawn into a journey, at the live shows and on this new release.

With an unfaltering momentum behind them and already a nomination in the Southern Star awards for independent artists, Simply Bushed is currently preparing to release their third studio album, “This Country”, recorded at Pacific International Studios by Rob Mackay and distributed through WJO.


A bright, bouncy tune that rings with huge harmonies. “Making Hay” is not just literal, there’s an added dimension that might be difficult for the single men among us to understand, that of a love matured for years but still feels brand new every day!