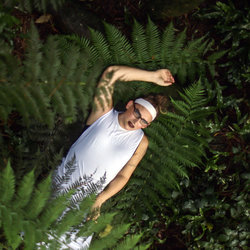 Simona’s beat driven and emotionally textured techno-pop expresses the borderline space between euphoria, desolation and aggression - tied together by narratives of nonconformity, queer cities, gender and relationships. Her performances are cardio-electronic percussive events of shared catharsis and self-confrontation; a one-woman industrial rave delivered through drums, smoke haze and laser beams.

Simona emerged as a DJ and performer in Melbourne’s late nineties queer clubs playing in Fluorescent and as Kapitolina and later drumming with Ana Nicole. From beginnings at Melbourne institutions Meccanoid and Q&A to regular spots at Sinthetic, Trough, John and Flawless she began her own music label Girls Who Smoke Poke and club night The Shock Of The New. By 2013 Simona had evolved into a unique solo artist releasing the single ‘Still’; which remains an iconic piece of queer pop music. After signing with LISTEN Records in 2016, her album #TriggerWarning40 was considered a breakthrough release. Simona went on to tour extensively through Australia, Europe and the USA - DJing at Club PAT in New York, to warehouse parties in Los Angeles and performing live in Stockholm.


‘Triumph’ is a determined change in mood from SIMONA - with bold remixes and darker excursions into club space. Melbourne’s Various Asses develops ‘Breakfast of Champions’ emotional textures, leaving SIMONA to move head first into pure techno bliss in ‘Collect’ on the B-Side.