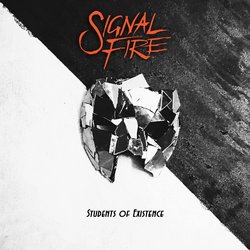 Signal Fire is the brain-child of both Mitchell James; a multi-instrumentalist, record producer, and singer-songwriter, and Wulf Fischer; an author and rapper.

With Mitchell's background focusing heavily on the art of instrumentation and composition, as well as singing, and Wulf's being that of a writer and rapper, they have set out to compose, write, record, and publish not only five separate entries in a saga-like series of concept albums, but also a novel that mirrors that narrative.

Commencing focus on their debut LP, "Snow Globe Suburbia", in May 2015, they spent a little over a year crafting and fine-tuning the album, and are now in the process of releasing it whilst simultaneously working on their sophomore project: an EP that shall serve as a prequel to SGS.


Broken Mirror continues on from Getaway Girl, where the main character of the story, Wulf (note: this character is fictional), writes a letter to Cherry Lane, with the clear intent of encouraging her to deal with her issues, rather than run away from them through substance-abusing escapism.

Other tracks by Signal Fire: Getaway Girl  -  Students of Existence
%