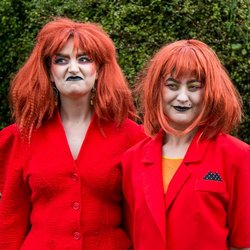 Shrimpwitch entered the collective consciousness of Melbourne punters in 2015, playing countless shows and self-releasing a couple of absolute corkers - all the while challenging the notion of what a live show should be, including jokes and banter that puts the best comedians to shame. Launching their debut 7" via the highly-lauded Hysterical Records last May to a sold out crowd secured their place as a favourite in Melbourne's long line of legendary garage punk acts.

Their latest single Leerers, and recent release Digestion (on a split 7" with Hearts and Rockets), are out now and are the first taste of their debut album - due out in January 2019.


Leerers is about trying to say no to creeps and leerers when you feel backed up against the wall. It's inspired from two experiences I've had while performing. So it's self-referential, in that when I'm performing live, I'm literally screaming at people that "I'm not here for you to leer". But through song - I'm actually screaming at you- live!