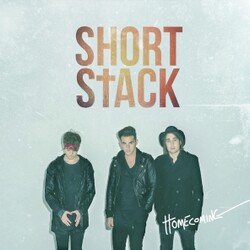 It’s hard to believe that it was a decade ago that three friends from Newcastle released 40 copies of a self-produced EP called One Size Fits All and kick-started a homegrown pop punk revolution that has transfixed Aussie music lovers ever since. Ten years on, Short Stack have had two Top Ten albums – including a #1 with Stack Is The New Black – three Top Ten singles, a breakup, and now, a hugely popular reformation – all by the age of 25.

Following on from comeback single “Dance With Me”, Short Stack drop their third official studio album, the fittingly titled Homecoming. It’s a scintillating set of raw rock & roll, an album that distills all the experience the trio have absorbed over the past decade into the sort of album they would have killed to make as teenagers.

The album’s powerful, fresh vibe is not only a new artistic milestone for Shaun, Andy and Bradie, it also represents the beginning of a new creative process for the trio.

The time the bandmates have spent apart has had a massively positive influence on their creative relationship, allowing their next chapter to be every bit as exciting as their last.


Marking what would've been Elvis Presley’s 81st birthday, Short Stack are honouring the occasion with the release of the video for brand new single ‘Elvis’; the 4th single to be lifted from the Top 5 ARIA Album ‘Homecoming’. The track proceeds the comeback singles ‘Dance With Me’, ‘Amy’ and ‘Gravity’.