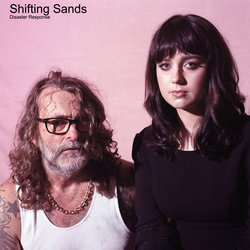 Geoff Corbett (SixFtHick) and Dylan McCormack (Gentle Ben & his Sensitive Side, The Polaroids) initially created Shifting Sands by gluing together words and music as a post-work debrief to take the edge off dealing with life’s little realities of someone else’s problems working in drug rehab.

At the core Corbett and McCormack along with a revolving door of Brisbane’s finest managed to spit out something not heard and not tried on the stage-boards for quite some time, maybe forever (in northern climes at least). It was tagged down-beat, depresso-core. The Sands were the quietest heaviest band around and still are.

The debut album “Beach Coma” released on Melbourne’s Spooky and France's Beast label garnered critical acclaim on both Australian shores and the European continent. That was four years ago.

The interim has seen a shift for Corbett and McCormack and no longer was it someone else’s problem. It became personal.

Other tracks by Shifting Sands: Would've Killed Each Other
%