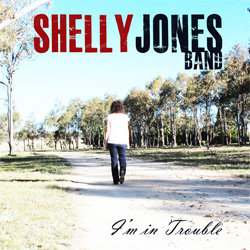 Mid North Coast NSW based Shelly Jones Band are an exciting fun-loving duo featuring Shelly Jones and her husband Lester. They have gained high accolades for performing regularly throughout NSW, where audiences have embraced their engaging show packed with familiar songs and a touch of humour.
Both accomplished singer-songwriters, they formed The Shelly Jones Band in 2002 as an outlet for their original fresh brand of contemporary country music. Several of their original songs featured on their debut album ‘New Day Dawning’ recorded back in 2006 which placed them as finalists in The 2008 Victorian & National Country Music Awards for “Best New Talent” and “Group of the Year”.

Their long awaited second album is due for release in January 2014. The new album titled, I’m In Trouble, has a selection of some great original songs along with a few modern country arrangements of classic covers.