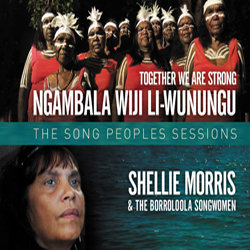 Shellie Morris is one of Australia’s finest Indigenous singer songwriters. Described as ‘an Aboriginal chanteuse of rare seriousness and grace’, Morris is a unique artist who can traverse world stages to campfire concerts in Australia’s remotest communities.

Best known for her role in Black Arm Band, Morris is a two-time winner of Female Musician of the Year at the Indigenous Music Awards and has worked with some of the largest stars in the music industry around the world [Sinead O’Connor, John Cale, Gurrumul]. Her new release Ngambala Wiji li-Wunungu [Together We Are Strong] is a career highlight and is said to be her most important work to date. As the first album by an Indigenous contemporary female singer/songwriter sung entirely in Indigenous languages of the Gulf Country, listeners will find that it has the same emotional connective qualities as that of Gurrumul.


Taking you to the shore of Borroloola, hear the waves lapping on the beach as the soaring sounds of Waliwaliyangu Li-Anthawirriyarra feed your soul. This track from Shellie Morris’ new album Ngambala Wiji li-Wunungu [Together We Are Strong] features several generations of Yanyuwa women and leaves you craving for more.