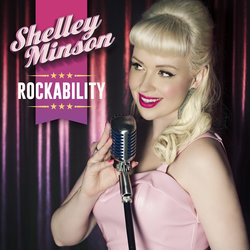 Tamworth singer songwriter Shelley Minson launched her debut album Rockability in March this year. The album was produced by her multi Golden Guitar winning husband Lawrie Minson and was released in time for their performance at the 20th Anniversary of the Viva Las Vegas Festival, held in Las Vegas over Easter.

Rockability consists of mostly original songs and showcases the talents of some of Australia’s top session musicians and backing singers. The songs were all crafted to suit Shelley’s style and the CD package was compiled by award winning artist Glen Hannah. Rock legend Ross Wilson helped pen the song Rockabilly Man and has been a big supporter of Shelley’s career.


Rockabilly Man is a song about a girl in love with a hip Rockabilly guitar slinger. He plays in a band but she’s his girl and has got what it takes to keep him.
Co-written by Shelley, Lawrie and Ross Wilson.

Other tracks by Shelley Minson: Rockability