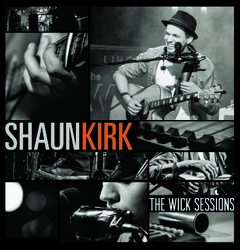 Capturing the energy of a killer live show and laying it down in the studio is by no means an easy feat, however in the case of blues and soul multi-instrumentalist Shaun Kirk, the transference was surprisingly seamless. Recorded and filmed at Wick Studios in Melbourne, Shaun’s latest album and accompanying DVD, ‘The Wick Sessions’, was inspired by Freddie King’s ‘In Concert: Dallas, Texas – 1973’ and sees Kirk take his one-man-band set up of guitars, harmonicas, pedals and gadgets to a whole new level. To celebrate the release, Kirk will bring his ever-evolving live show out of the studio and on the road, kicking off with debut appearances at this years’ Port Fairy Folk Festival and Byron Bay Bluesfest!


Pinned as having “one of the finest blues voices this country has ever heard” (Buzz Magazine), Kirk’s new record is hard-hitting, warm and honest, encapsulating all of the intensity and exhilaration that comes with a Shaun Kirk live experience. His immense voice wails whilst channeling his influences of the Delta blues era.


'Steam Train', a favourite when played live, was released on Shaun's last release 'Thank You For Giving Me The Blues' and offers listeners a more raucous and upbeat version.

Other tracks by Shaun Kirk: Every Dog Will Have Its Day  -  Smokestack Lighting
%