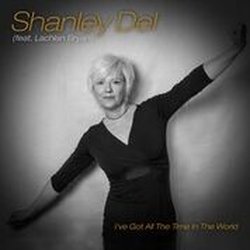 Shanley recorded and released three albums for RooArt/Sony/BMG between 1993 and 2001. Her album “My Own Sweet Time” won the 1998 ARIA Award for Best Country Album. She’s received many other awards nominations and toured with some of the best. Including Joan Armatrading, Janis Ian, Men At Work and Don Williams.

Then Shanley took a break from performing in her own right but she’s hardly been inactive and has continued with recording sessions, guest performances with other artists and other one-off projects in a variety of different genres.

Coming in November is a new EP from Shanley and James Gillard and expect an album from them in 2019.


It’s been a long time between White Russians for Shanley, whose last release was an album called The Other Side in 2001, But the moment you hear her voice on "I’ve Got All The Time In The World" the space between releases will evaporate. Shanley is back.