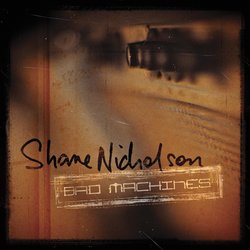 A native of Brisbane, Australia, singer/songwriter Shane Nicholson first gained public attention as the lead-singer/guitarist for the rock band
Pretty Violet Stain in the late 1990’s. Interested in music from a young age, Nicholson formed the band while in high school. After winning the JJJ Unearthed competition, they released their debut album
Parachutes and Gravity on Warner in 2000. Ultimately, Shane parted ways with the band and released his debut solo album It's A Movie in 2003, followed by Faith & Science in 2006 – both albums receiving wide critical acclaim and a good measure of commercial success following extensive touring in both Australia and the USA.
In the past, music critics have been unanimous in their praise, many drawing on names such as Bruce Springsteen and Steve Earle in an attempt to describe the depth of Shane’s songs and the extent of his honest and emotional vocal delivery. However in recent times there is no doubt at all that Shane has created a unique musical place for himself.
The release of Bad Machines in March 2011 is eagerly awaited by the ever-growing legion of Shane Nicholson fans.


‘This song arrived fully formed,’ explains Shane. ‘It wrote itself in less than 45 minutes. When it was finished, I instantly thought of Paul Kelly – I could hear his storyteller’s voice relaying the lyric – and having him sing this with me is a special thing.’