Seeing Verity - Not a Superhero 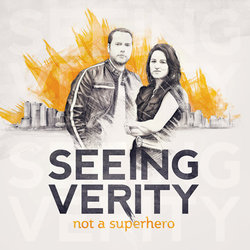 As most bands who form together for the love of music, musical duo James and Jasmine Green were no different when they formed their indie-band, Seeing Verity; although technically speaking, perhaps love itself, and subsequently marriage, were also ‘small’ factors for the duo’s formation.

All mushy stuff aside though, James and Jasmine first began collaborating musically in 2001 at their local church in Western Sydney.

Writing and performing their songs at church, weddings and even baby dedications, the duo decided to test the waters and see how their other songs would fare in the wide, big world.

Combining a unique sound with lyrics purposefully written to contain a message of hope and truth, Seeing Verity made its foray into the Christian music-scene in 2006 when the duo secured their very first gig at The Undaground, in Padstow.

Playing to an audience of family, friends, and oh-so nice strangers, Seeing Verity received a delightful reception for their blend of acoustic and pop songs.

Four years later —and now settled into the groove of married-life— Seeing Verity have returned to release their new EP single “Not a Superhero” in spring 2010, with a full album coming later in 2011.


Not a Superhero is about overcoming personal obstacles and past failures and making a decision to embrace every opportunity to live life to the fullest - even if one isn't a superhero who can fly, walk through walls, or sew on a button!

Other tracks by Seeing Verity: Call Out
%