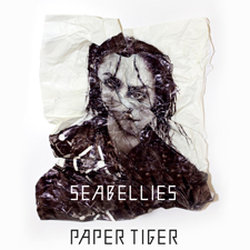 Seabellies are all multi-instrumentalists and each member carries their talent, ideas and wonder into heavy song-writing sessions.
Their debut “By Limbo Lake” (2010) received airplay on Triple J, feature albums on blogs, Street Press and Community Radio and supported with endless touring and stimulating videos.

Arcade Fire, Broken Social Scene and The Triffids, all comparison’s made to the Newcastle band, but this captivating sextet, full of rich melodies, layered instrumentation and restless energy continually evolved adding depth and character, cementing a sound of their own.

Returning with sophomore album Fever Belle (out 2013), Seabellies are more comfortable and confident in abilities to create widescreen indie pop/rock infused with electronic elements. Self-funded and recorded in Sydney and Berlin enabled the band freedom to make a sprawling and diverse album influenced only by the cities they lived.

What resulted was an album far more dynamic than anything they had ever attempted before. Produced by Simon Berkleman (aka Berkfinger of Philadelphia Jury) and Tim Whitten. Both approached the song differently resulting in gorgeous classic sounds combined with innovative recording methods. Lyrically Fever Belle is about projections with many becoming realities during the recording. Heartbreak, Death, Love and Loss all part of Fever Belle.