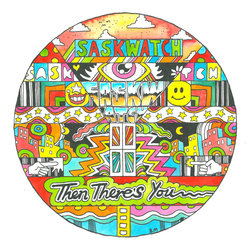 Releasing their third studio album almost 2 years ago, Saskwatch have never been one to shy away from the unconventional. After spending their first two albums Leave It All Behind (2012) and Nose Dive (2014) establishing themselves and their sound, 2015’s Sorry I Let It Come Between Us took listeners on another trajectory entirely. More vulnerable, honest, and simple, the album revealed a depth of emotion and heartache not previously associated with their music, and lead the way to a brand new Saskwatch featured on ‘Manual Override’ (August 4, 2017) – comfortable in the malleability of their sound, and ready to show you a side of their music you have never seen before.

Where “December Nights” was bold, bright, and in your face, new single “Then There’s You” brings it back a notch, offering up a swirling, woozy, honest track about keeping it together when things are falling apart.

“Then There’s You” is the second single from their upcoming album ‘Manual Override’ – out August 4.


“Then There’s You is a song for the bumps in the road. It’s about having the courage to keep the faith when things start to fall apart.” – Liam McGorry (guitar/keys)


Other tracks by Saskwatch: Gemini
%