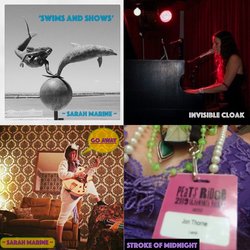 Following the success of her ‘Stroke of Midnight’ EP and single release tour for ‘Go Away’ in 2018, Sarah’s debut music video was officially launched with an East-Coast tour in 2019:

“On her new single ‘Swims and Shows’, Sydney based singer-songwriter Sarah Marine presents a lush, sweeping slice of folk-pop brilliance… she continues to establish herself as one of Aussie music’s most exciting emerging voices” – Happy Mag

Having performed on the main stage of the Tastings on the Hastings Festival, supported Claude Haye, and recording her originals with musicians such as Matt Smith (Thirsty Merc, Pete Murray) Sarah is quickly building a name for her indie creations and mesmerising performances.

“(Sarah’s) song structures are lead by her cheeky personality and absolute originality. Melodically bold, quirky and imaginative with a stage presence that presumes rapport like there was only ever you in the room” – Tom Lee-Richards

Sarah Marine acquired her second name while sitting on a cliff overlooking the Pacific ocean, in awe of its ability to be powerful, beautiful, fun, tempestuous, cathartic and continually changing ~ just like music.


An upbeat, summery song about a nice slice of tour life:

Sarah recorded and mixed ‘Swims And Shows’ in her studio after writing it while on the road during her 'Go Away' tour. It includes layers of Vocal harmonies, Arch top guitar, Rhodes, Organ bass, Maracca, Rain stick, Guiro, natural bird sounds & her cat Bowie purring into the mic.


Other tracks by Sarah Marine: Go Away  -  Stroke Of Midnight