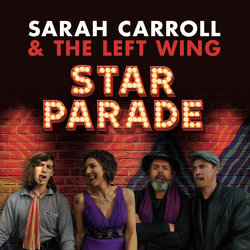 Sarah Carroll is an original singer/songwriter, well known for her work with GIT, The Junes, The Cartridge Family, The Pirates Of Beer and partner Chris Wilson, and most recently, Aine Tyrrell and Jackie Marshall. She specialises in country, but loves the bossa nova and has rhythm and blues in her heart!
Sarah and new band The Left Wing will launch her 5th album, a progressive country epic titled Star Parade, at Port Fairy Folk Festival in March and on tour around eastern Australia. This will be her debut release on highly regarded boutique label Sugar Rush. This album is the result of not only a year's work but also a fifteen year friendship with producer Leigh Ivin, whose credits include The Beautiful Lie (ABC TV), Jackie Marshall and The Re-Mains. The album features outstanding performances from Leigh, drummer Ronny Rindo and Sarah's supernaturally talented son George, as well as stellar work from the likes of Gleny Rae and Jackie Marshall.
Sarah's current releases include Country Con Queso, the latest all-singin', all swingin’ manifesto from The Junes, and Soft Gold, an album of duets with Marcel Borrack. These songs were described by Marty Jones of Rhythms as "pretty, plaintive and exquisite...classic".


Upbeat title track from Sarah Carroll's new album Star Parade. For anyone who loves a driving tune - this is for you.

Other tracks by Sarah Carroll and The Left Wing: Lived Your Life Twice  -  After The Ride
%