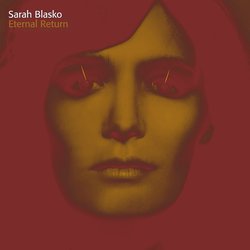 Sarah Blasko’s Eternal Return is an unabashed paean to love, and Blasko is more than happy to admit it, “I’m very open about that. It’s a “love album”, and it’s from personal experience.”

For the most part, the lyrics on the album are disarmingly simple. Blasko’s words are direct, almost naked in their honesty, and poetic imagery is kept to a bare minimum. There is a conversational, first-person immediacy about the songs that no listener could ever misapprehend. They are emotionally explicit, and have the ring of truth.

Eternal Return has a marked retro-electronic vibe throughout, which was a conscious choice: “I got interested in old synths again, which I haven’t been for a few years,” says Blasko. “Growing up as a kid in the ’80's, a lot of my favourite pop records were synth-based, and lot of my favourite love songs were written in that era.”

Despite the nostalgic ‘80's influences there is nothing lightweight or cheesy about either the songs or the production. Blasko and her collaborators scrupulously avoid the era’s clichés and keep everything understated and taut, never sugary. The overall effect is that the poignant lyrics and ravishing melodies always take centre stage.


One year on from the release of her sixth album, Sarah Blasko unveils a deluxe digital version of the highly acclaimed, Eternal Return released on November 17.
The package includes new album artwork plus two new tracks and a remix from Stella Mozgawa of Warpaint.