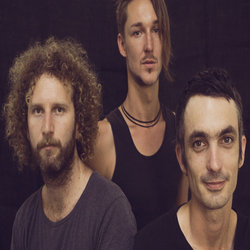 Scribing a new chapter in their collective story owing to line-up changes and moving from a three-piece outfit to a four-piece concern, Sans Gras' new EP Shed Your Woes sees the band infusing a more instinctive approach to both songwriting and recording. Starting with a frantic three-day session at Tender Trap Studios in 2011 before being completed throughout the year. The album was mixed and mastered by Rob Long and Lindsay Gravina at Birdland Studios.

Says the band's Cayn Borthwick "Our approach was in direct opposition to how our first EP Retrograde Motion was tackled, which was assembled from parts recorded at different times and in different locations. The difference between the two is that Retrograde Motion was about the songs whereas Shed Your Woes is about the band. As a four-piece Sans Gras have found the muscle and the space to serve the existing songs and pursue new ones with a new enthusiasm and more distinct purpose."


A paean to the festival of plenty, Meredith, 'Sun Come Up' captures its subject in all her glory. A song in three distinct movements, 'Sun Come Up' ramps up the viscera with mountainous harmonies, prog-tinged melody and a throbbing riff that commands attention and gains respect.