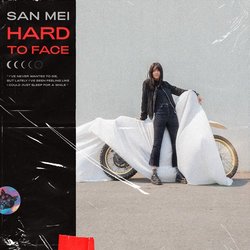 Having just been announced to showcase for a second time at SXSW 2020 and having wrapped her debut national headline tour in 2019, Australian alt-pop artist San Mei announces her new single ‘Hard To Face’. Produced by Oscar Dawson (Holy Holy, Alex Lahey, Ali Barter, British India), 'Hard To Face' is another step forward in the guitar heavy, delay-ridden, dreamy pop world of San Mei and the wider Australian indie scene. San Mei sparked the interest of tastemakers around the world in 2018 with her breakthrough single ‘Wonder’, which hit #1 on the Hype Machine chart, got added to triple j and cemented her in the most played unsigned artists, before going on to showcase at BIGSOUND Festival 2018. This excitement was equally shared by the likes of Jack River, Middle Kids, Gang Of Youths, K.Flay, Stella Donnelly, and K.Flay who invited San Mei to support them at shows around the country.

With the momentum continuing into 2019, San Mei was hand-picked by triple j Unearthed to make her debut major festival appearance at the iconic Falls Festival, played a mammoth nine shows at SXSW 2019, signed to Australian label etcetc, and most recently wrapped her debut national headline tour.


San Mei: I wrote this song when I was in a bit of a tough place mentally about my music, my career, my future... it felt like every time I looked around everyone else was kicking goals and ticking boxes, and I just felt kinda stuck, and wanted to be where they were or have what they had.