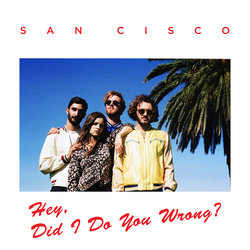 San Cisco’s storm came in much like a front approaching the port in their home town of Fremantle; swift and eerily beautiful. Initially whipped up in the wake of high school graduation, the foursome of Jordi, Josh, Scarlett, and Nick soon found themselves unwittingly defining hipster culture with the video for their breakout hit “Awkward.”

Fast forward to 2015 where San Cisco enlisted the help of producer and long-term collaborator Steven Schram to deliver their sophomore album Gracetown which debuted at #2 on the ARIA charts. The album showcased a new sound for the band - more worldly approach to life; exploring the tyranny of love, displacement, homesickness, heartache and heartbreak, via disco, funk, soul and hip hop undertones.

Now it’s time to unleash the third sophomore album, The Water onto the world. A taste of the album was served up with single “SloMo” and a bonus B Side (aptly named “B Side”) hitting the airwaves late last year. With more hits to come, The Water is as diverse in its sound as it is in subject matters.

The Water will be available to purchase globally on Friday 5th May from iTunes.


“Hey, Did I Do You Wrong?” is a laid back, highly infectious track which invokes summer afternoons by the beach in the band's home town of Fremantle.

Perfect for road trip singalongs, singer Jordi ponders the dissolution of a close friendship. Is it him or have they grown apart?


Other tracks by San Cisco: Make Me Electrify  -  Sunrise