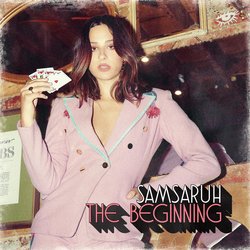 The Melbourne singer-songwriter's debut release from 2017 ‘Golden To Thrive’ was added to high rotation on triple j and triple j unearthed as well as earning her the title of Feature Artist on triple j unearthed. The single charted in the Spotify Australia Viral Charts Top 30 as well as charting in the Shazam Top 100 Australian Chart for over six weeks, with more than 25,000 Shazams of the track. The single was widely loved by media and fans alike, helping triple j unearthed handpick Samsaruh to play their coveted Falls Festival spot in Lorne. Samsaruh’s follow up single ‘Beautiful Killer’ took it up a notch; widely loved by radio and listeners the track earnt the #1 played spot on triple j and named Samsaruh the #1 unsigned artist across the station. Samsaruh spent the second half of 2017 travelling the country in support of Dean Lewis on his sold out national tour and finished the year performing at Falls Festival Lorne and NYE on the Hill. In 2018 her single 'Speaking Fire' was added to rotation on triple j and triple j unearthed and further cemented Samsaruh as 'one to watch' as her infectious tracks take over the country.


A musical force to be reckoned with, Samsaruh today has shared her unforgettable new single 'The Beginning' - showcasing her incredible vocal prowess, complimented by killer guitar leads - 'The Beginning' is a powerful statement, Samsaruh means business.