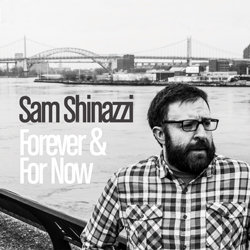 Engineered and produced by long-time collaborator Adam Wes Gregorace. Mixing brilliance from the skilled David Trumpmanis (Something For Kate, You Am I, The Church).

Sam has developed into the kind of songwriter and performer that not only has a strong emotional bond with his listeners, but also has the respect of his peers.

"Raw emotion and authenticity are the hardest things for a singer/songwriter to get across. Sam, on his newest album Forever & For Now not only delivers them both, lyrically and musically, but does so with a warm embrace. Sounds that harken back to the indie, grand, guitar alt-rock of Boston's heroes the Lemonheads and Grant Lee Buffalo, but all fresh for today. Mr Shinazzi's finest work, and so well worth embracing yourself." Michael Taylor MD Universal Music Australia


The first ever SAM co-write, I've known Adam 'T-Bone' Taylor since we were 18 and 15 respectively, joining Team Shinazzi in 2005. He wrote the melody, I threw in a chorus and words. The lyrics are abstract, but hold as much meaning and truth as any I've written.

Other tracks by Sam Shinazzi: Bones  -  The Day We Met
%