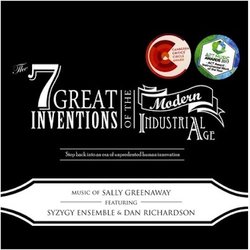 Award winning Canberra-based composer-pianist Sally Greenaway (b. 1984) works in a multiplicity of styles and genres, from orchestral film and concert works to jazz ensemble, big band, chamber and vocal music.
Hailing from Canberra, her latest album Aubade & Nocturne (2015) was released to critical acclaim on the ABC Classics record label and was long-listed for the Australian Music Prize. The album also earned her a coveted Canberra Critics Circle Award.

Greenaway is a post-graduate from the Royal College of Music, London, where she received the Lucy Anne Jones award.
She has more than 60 works published, many of which are available through the Australian Music Centre.


This Finale brings the return of several of the musical themes from each of the pieces in the suite together in a medley or overture. It reminds us of the journey we have taken, and bookends nicely with the final bars scored for solo ragtime piano.

Other tracks by Sally Greenaway: Invention Reinvention  -  The Mechanical Brain
%