Sally-Anne Whitten - You Can't Hide From A Broken Heart 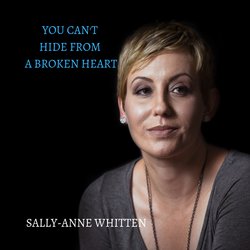 Sally-Anne Whitten was born and raised in Tamworth on a healthy dose of blues/rock/country. Her father, guitarist/piano/bass player Barry Whitten saw to it that Sally-Anne was immersed in all things music which included teaching her to read and write music. From the age of 15 she was working as a session player (bass and guitar) alongside her dad. Over the years the artist has honed her very own style of ‘funky country’.

Sally-Anne’s heroes include John Hiatt & Rodney Crowell and she’s been blessed to share the stage with many big name acts but no more rewarding that Keith Urban – for whom she opened a hometown show in 2000.


Co-written by fellow Tamworth artist, Allison Forbes, explores grief and loss. Having already booked a trip to USA, when a list of death and disasters occurred for her family, she was in two minds about going. With no refunds, the trip went ahead. The singer soon realised ‘you can't hide from a broken heart’, it will follow you everywhere.