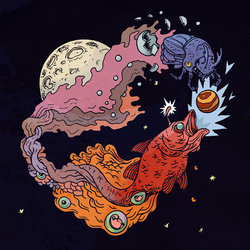 In the three years since Saint Jude released their acclaimed album Saint Jude Three (PBSfm and Beat Magazine album of the week), the band underwent a lineup change that saw the new inclusions of long-time collaborator Steve Harris on synthesizer and Sam Johnstone (Jimmy Tait) on drums.

This freshly-minted six-piece began weekly sessions to work on some new material and it was immediately noticeable that things were different. Very different.

Gone are the sweet four-piece vocal harmonies. Gone are the country-soul allusions and gone are the abundance of guest players (the previous album, Saint Jude Three, had more than ten). In place of all of this is something primal, insular and unyielding.

With Six, Saint Jude has dismantled the preceding three albums worth of pretext in favour of exploring a heavier, more rhythmic approach. Not only do the first three albums not feel like warm-ups for Six, they don’t even seem to occupy the same universe.


Six is a rhythmic, pulsating jam full of driving drums and swirling synths. Six sees Saint Jude pushing itself far beyond the limits of its previous incarnation, isolating itself from its milieu in order to explore its own understanding of rock and psychedelic music.