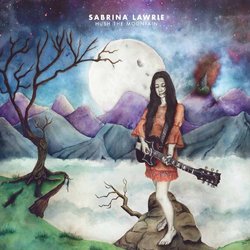 Sabrina creates a mixture of dark pop, brooding stoner rock and psychedelia, all of it topped by a voice that has no right to explode from such a tiny frame. Her shape-shifting songs, which rarely follow conventional structures, are by turns aggressive and restrained, mind-bendingly strange, and often eerily beautiful and her guitar playing, drops many of her peers to their knees.

Lots of real-life stuff has happened in between starting the record and it's completion: Sabrina’s first child Quinn arrived three years ago. Then, early last year – with recording all but complete – a serious, near-fatal fall saw her hospitalised with a broken back, ribs and left wrist. Now, fully equipped with a plate of eight screws in her back, she’ll be setting off airport metal detectors for the rest of her life.

You can catch Sabrina Lawrie and the Hunting Party touring in a city near you very soon!


A breakup song, but also an empowerment anthem about letting go and moving on, Shine The Light builds from a simple guitar hook before taking off like a rocket to a dizzying chorus featuring multiple rotating counter-melodies.

Other tracks by Sabrina Lawrie: No Rules  -  Become