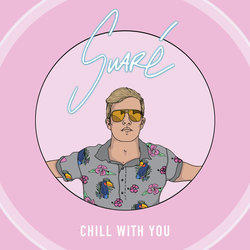 Swaré had always dabbled in the arts but it wasn't until a close friend made him watch Justice's 'Across The Universe' that Swaré's destiny was so clearly laid out before him. Inspired by a wave of French touch artists that emerged during the 'blog house' days as well as rock and pop icons like Bowie, Michael Jackson, Prince and Freddie Mercury, Swaré set out to make his own music in their wake.

He made his debut vocal appearance on Failr's Starving for You (feat. Swarè) in 2017 before releasing his deliciously danceable and down right dank debut single I Want You to Move.


‘Chill With You’ is an upbeat, pop-funk tune all about just that: Chilling. Scrapping the conventional pop narrative of going out and partying, Sware instead chooses something a little more like ‘Netflix and Chill’. Combining funky slap bass over a driving beat, playful vocal melodies and retro style synths, ‘Chill With You’ is his funkiest release yet.