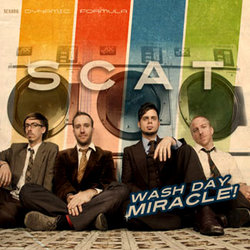 SCAT! They play jazz. This 4 piece band (vocals, keys, drums, double bass) does for jazz what bubbles do for soda-pop. Original tunes, tasty standards, clever arrangements, brilliant musicianship and serious humour is a package that audiences can’t get enough of. SCAT’s live show fronted by vocalist Craig Burnett is a unique blend of accessible sounds, instrumental mastery, lyric riffing, crowd interaction and off-beat humour. Craig believes their greatest and most frequent compliment says it all, “I don’t usually like jazz, but I love what you do!”

Their shiny new album “Wash Day Miracle” demonstrates the depth of their creativity and breadth of their appeal. This miraculous recording incorporates trad, 70s groove, latin, swing and bigband styles delivered in accessible originals and classic standards including a frenetic version of Twisted and the elegant When I Fall in Love. The album was launched to sellout shows in Brisbane and is gaining momentum online and instore.

Whilst SCAT frequently stage their own sellout shows they have also supported music icons such as James Morrison, The Whitlams, Delirious, Steven Curtis-Chapman, Monica Trapaga and Grace Knight.


This catchy pop song features cool story-like verses and simple sing-along chorus. Horns, guitar, bv's and percussion align it with the modern pop-funk genre - think Buble, Harry Connick Jr and Guy Sebastion. It carries a simple message about enjoying the vibe of life and sharing it around.

Other tracks by SCAT: Change Your Tune  -  This Little Light of Mine
%